On November 4, an awesome group of BCGC volunteers executed yet another project at the Connie Morella Library in downtown Bethesda. We spread more than a cubic yard of Bloom Woody Blend into the soil in the islands and peninsulas in the library parking lot. In addition, we spread nearly 150 pounds of cured Bloom around 21 trees recently planted by BCGC.

Since the library was rebuilt in 1976, the club has planted and maintained its gardens. Along the west wall of the parking lot and between the building and Arlington Road, well-established gardens are thriving.  We’ve recently planted and kept watered 21 trees throughout the property.

At the October 7 Montgomery County Master Gardeners meeting, a talk by April Thompson, director of Bloom Marketing, got my attention. She spoke about using Bloom soil conditioner products to recycle nitrogen, phosphorus and micronutrients back into local soils. Bloom soil conditioners are made from biosolids produced at the DC Water’s Blue Plains Advanced Wastewater Treatment Plant. According to its website, research conducted at VA Tech suggests its use also can improve water-holding capacity in poor soils.

I figured the Bloom products were worth a try in the parking lot islands. I wrote to April explaining our challenges: extremely poor and dry soil surrounded by blacktop. She suggested the appropriate products and how to use them.

And so a plan was made. We would add a quarter inch thick layer of Bloom Woody Blend to the parking islands and peninsulas, and add 7 pounds of Cured Bloom around each of the newly planted trees spread to a circumference of 3 feet. Betsy James and I measured the areas that would be treated. The figures were sent to April, and she calculated the amounts of each product we would order.

That’s how we arrived at the November 4 event. Volunteers signed up, but neither I nor our volunteers were sure exactly how we would get this done. 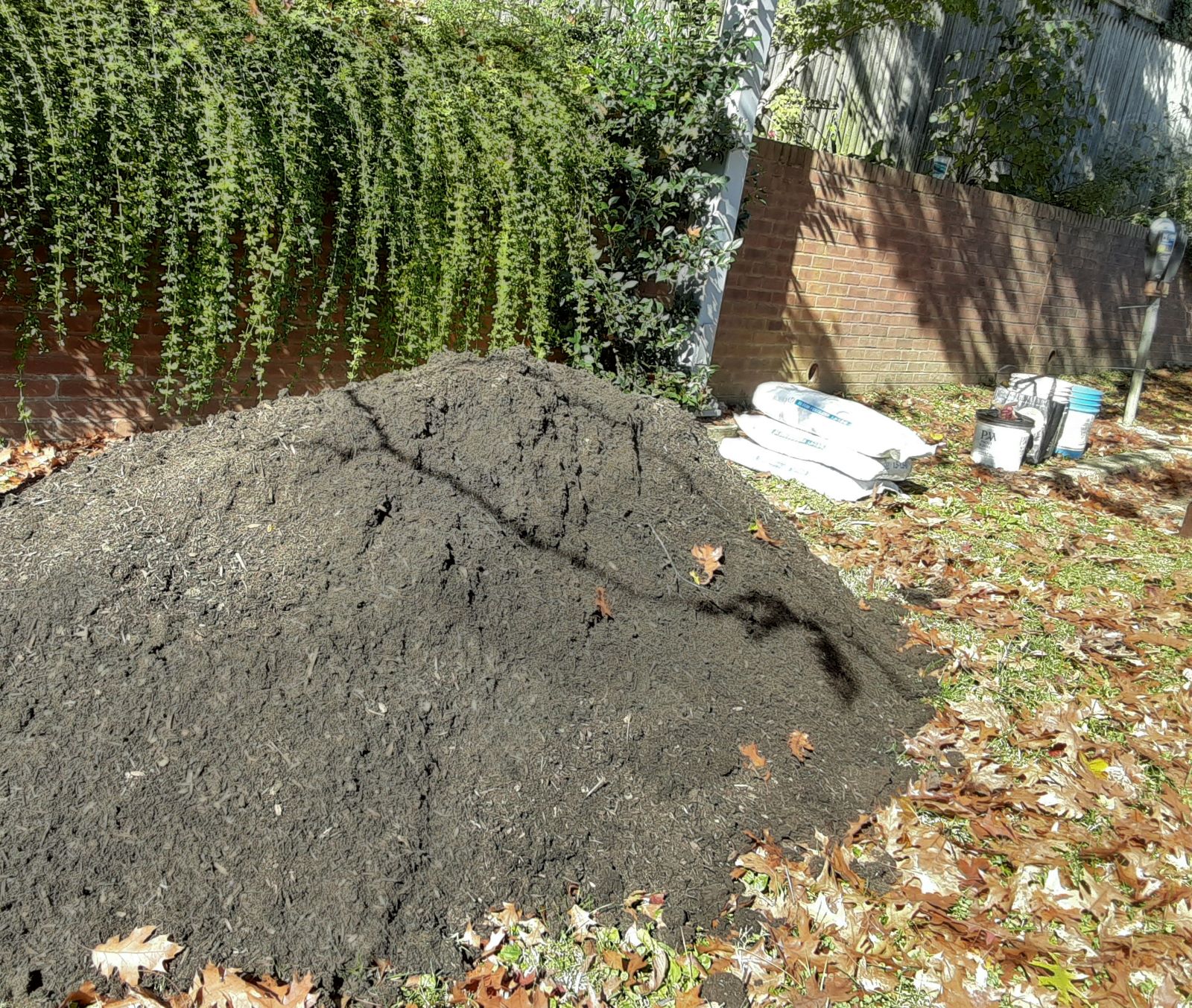 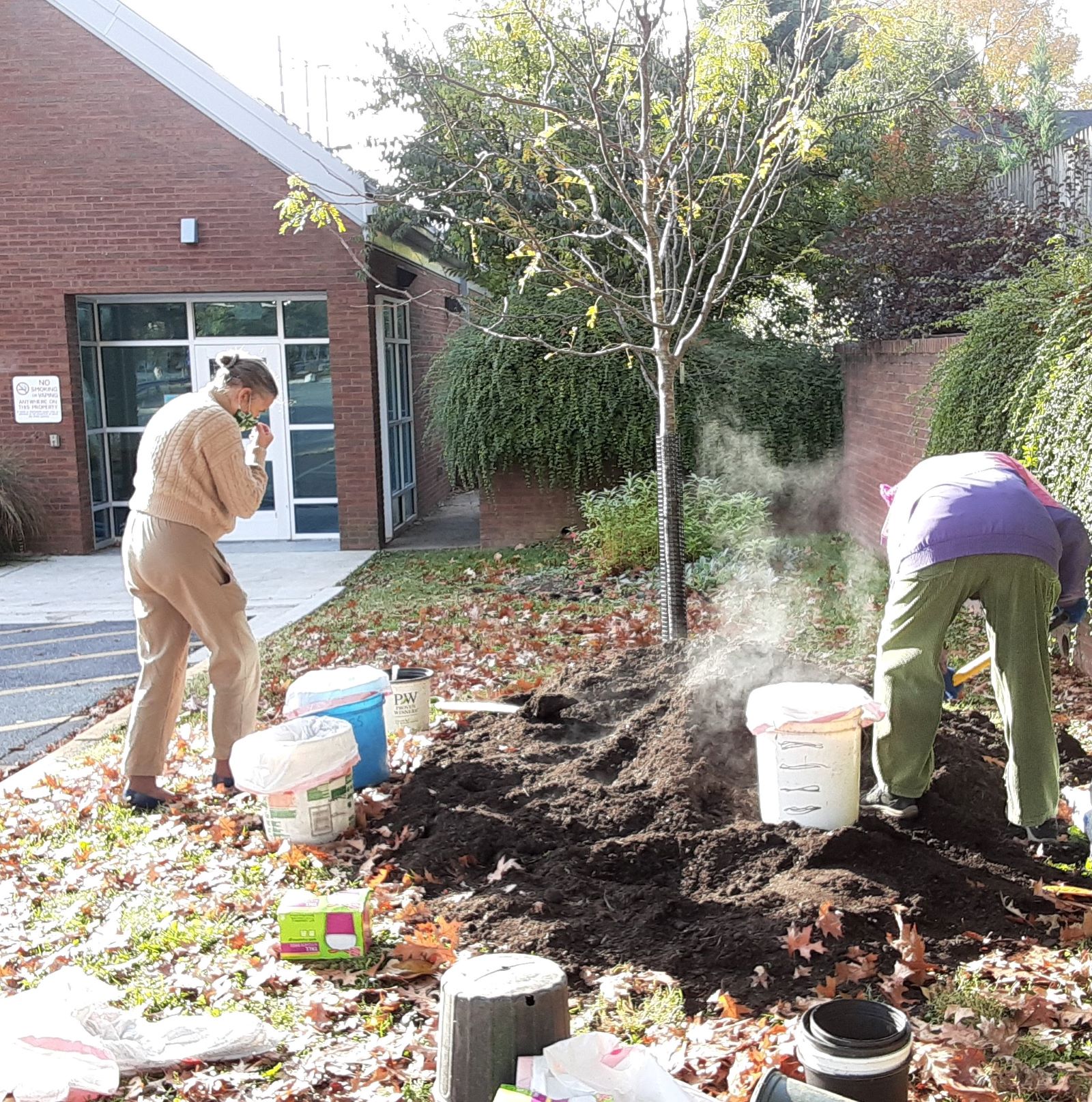 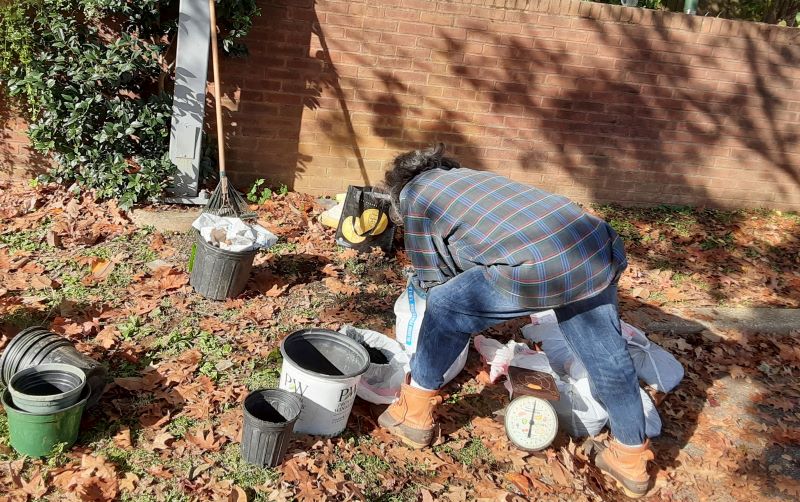 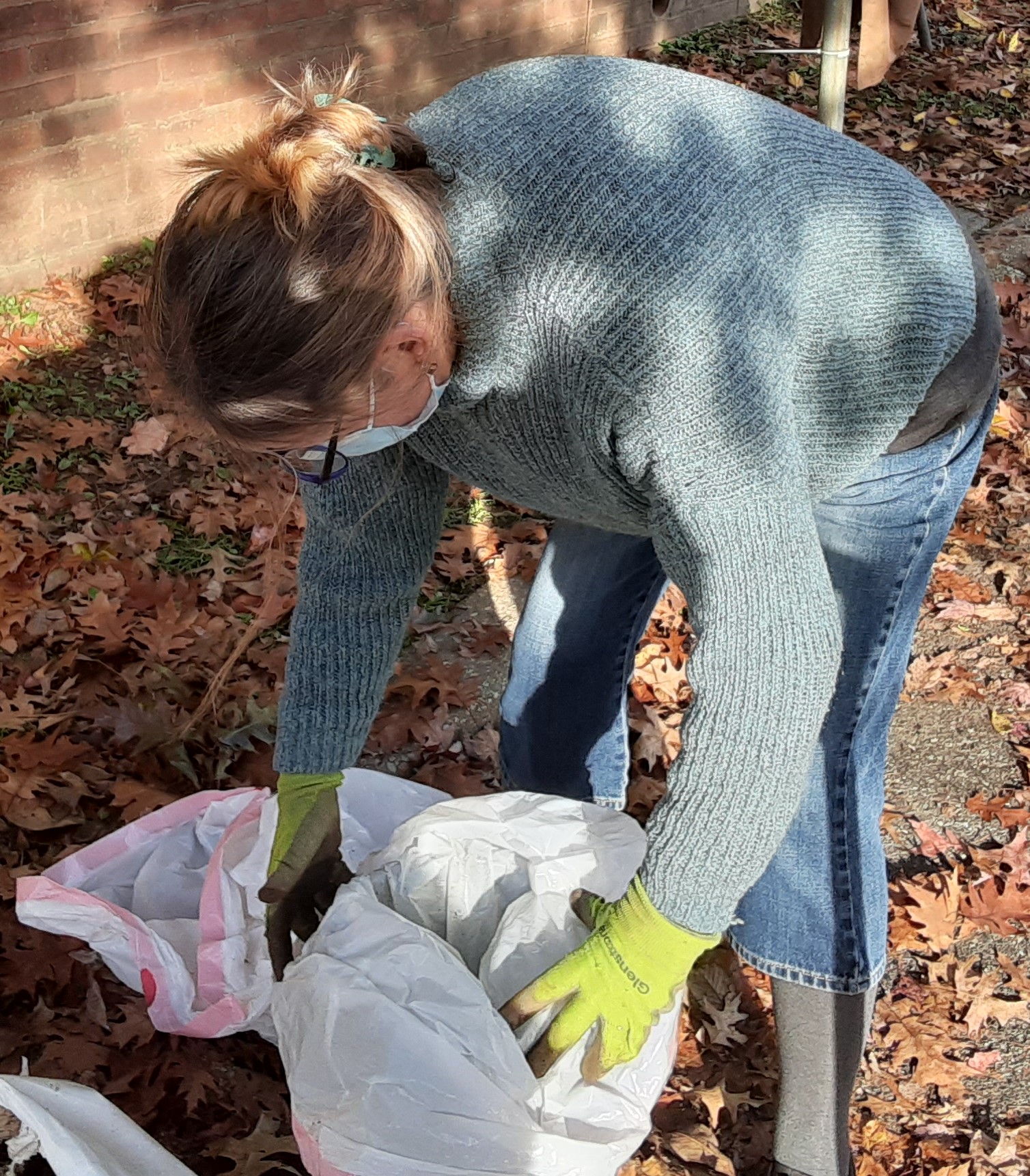 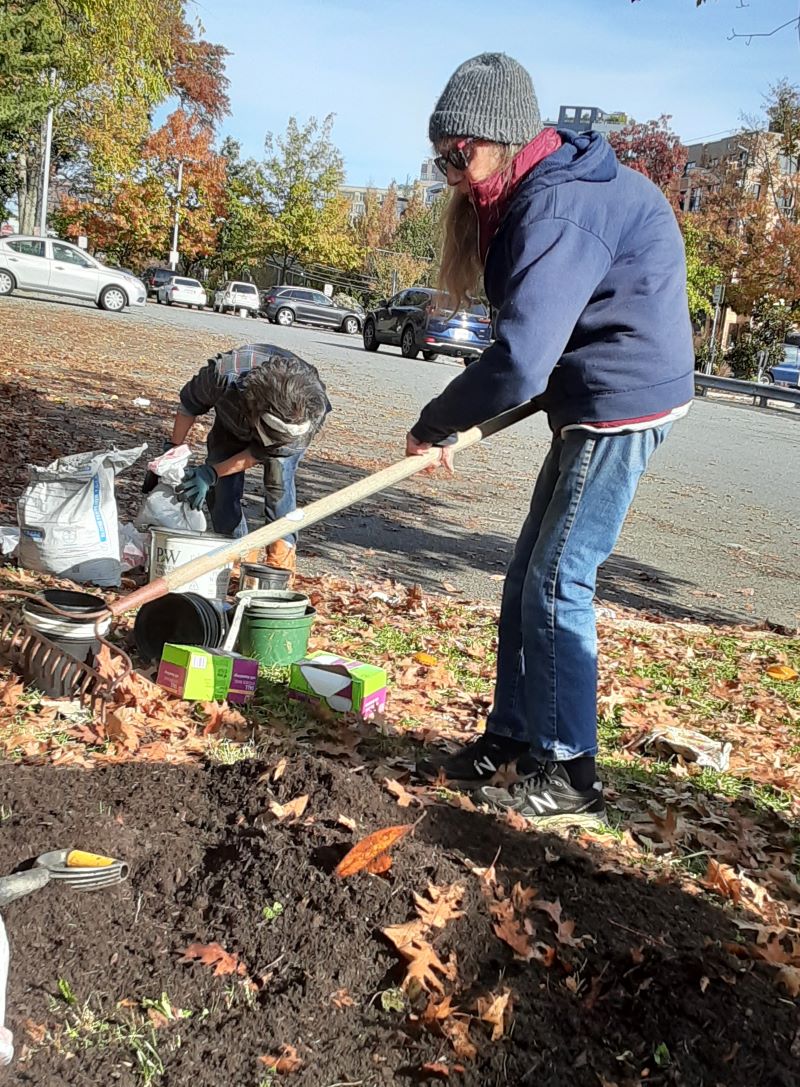 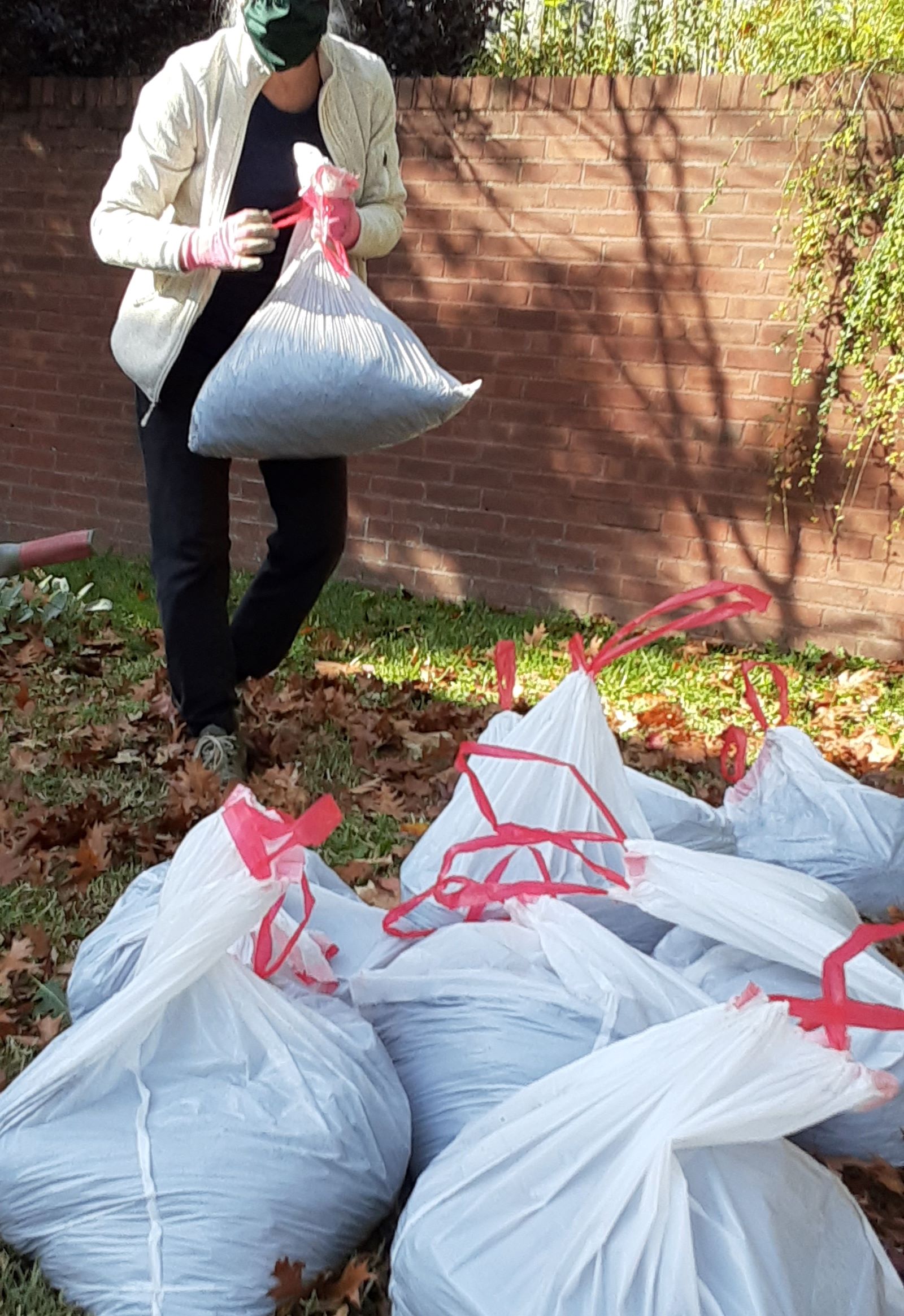 The cubic yard of Woody Blend was dumped at the library in a pile, not bagged. Our members broke it up into mostly 5 gallon amounts and transferred into biodegradable kitchen trash bags. They delivered the correct amounts, as previously calculated, to each of the parking lot islands and spread the soil conditioner over the area.

We started at 9:00 a.m. when it was probably close to 32 degrees.  No one had a chance to get really cold, because by 10:00 the intended work on the parking islands was mostly completed.

And we still had lots of woody blend left.

Mary Stanley, who had arrived early along with Maria Brown, asked if they could spread some of the remaining Woody Blend around other parts of the library gardens. Then these women got to it—again: in no special order, Candy Kessel, Mary Stanley, Gwen Stewart, Dawn Landsman, Maria Brown, Blanca Ruebensaal, Sylvia Diss, Nancy Davidian, Mary Horan, Betsy James, and Holly Joseph. I sure hope I didn’t forget anyone.

Before 11:00, the job of spreading the Woody Blend was virtually completed, and there was still a lot of product remaining. So they bagged the remainder and brought the bags to an out-of-sight storage area. These women just worked very, very hard and resolved problems I had not even considered, as smoothly as if they did it every day.

What about the young trees? Only Maj-Britt Dohlie knew where all the trees were. It fell to her and Blanca Ruebensaal to weigh and divide the three 50-pound bags of cured Bloom into 7-pound lots, again using kitchen trash bags. They then delivered the smaller bags to each of the trees and spread it to a circumference of 3 feet. At this point, I do not know who else joined in that effort because so much was happening simultaneously.

We thought 3 hours might be enough time to complete the original objectives, but never did I think it would be completed within 2 hours. Volunteers who had scheduling conflicts came as soon as they could, then took on other tasks after the main job was completed early.

Gwen Stewart planted some black-eyed Susans in one of the just-treated islands. Betsy James clipped back some crape myrtles. Other volunteers and I dragged the long hoses out of storage and watered areas where Bloom soil conditioners had been spread.

More recently, Candy procured 2 inkberry bushes, and Nina Stark-Slapnik  planted them in one of the areas we treated in the north end of the parking lot. I have watered the remaining treated areas, still feeling gratitude for all the good will.

From beginning to end, everyone went beyond their usual wonderful selves. Even the delivery guy, Doug Jeeter, showed me photos of his kids and left us with more Woody blend than we had ordered. That’s why we had so much left over.

Some of the carefully stored bags of extra Woody Blend had disappeared two days later. One of the guys from CER Lawn and Landscaping, which maintains the library grounds, kindly helped move all the remaining  bags to a secure location inside the fenced area, away from public access.

Dawn suggested that a visit to the Blue Plains Water Treatment Plant would be a good outing for the club. She has seen it and found it really interesting, and this is where our Bloom products started.

For now, we must wait until our next growing season to see what happens. Thank you to all who made this happen.